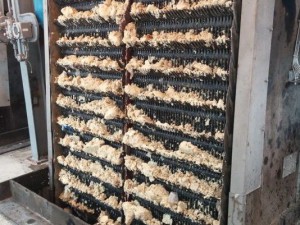 You’ve probably been told by your parents, plumbers, and Home Ec teacher that you shouldn’t pour grease and oils down the drain. These substances might start as liquids at the drain, but quickly harden, either in your pipes restricting flow and clogging, or clumps that form fatbergs. Now what happens when instead of pouring a few tablespoons of oil down your sink, you pour thousands of gallons of oil directly into the sewers? What happens is a crippled treatment plant, emergency government spending, and some very angry cops. Below are three stories about illegal grease dumping, and what you should take away from them.

Currently someone is illegally dumping thousands of gallons of grease down manholes in Orange. Not only is this causing major problems with the sewage system, but it’s also costing the town thousands of dollars.

“We don’t even have any money for it in the budget because it’s something that doesn’t normally occur and is not supposed to be occurring,” said R. Scott Allen, administrator of the town’s Water Pollution Control Authority.

However, this isn’t just a restaurant’s actions, currently police suspect this is a fraudulent grease hauling service avoiding disposal costs by illegal dumping. To avoid being an accomplice, make sure to vet your service properly: check their reviews and ask for references.

The city of Akron is currently asking for anyone to come forward about the illegal dumping of grease that has damaged its water reclamation facility. Reclamation facilities play a vital part in any city’s water system, keeping waste from entering both the water supply and contaminating the groundwater. Grease causes damage and takes a great deal of time to remove.

“If it’s gummed up, not working properly, that’s equipment that’s down. That’s equipment that we need to spend an awful lot of time cleaning it up and if you have got just a little bit of grease on your floor, you know how difficult it is to clean up. Well, imagine large amounts of grease in mechanical equipment,” said Vince Zampelli, the plant superintendent.

Currently it’s unclear whether this is the work of a grease removal service illegally dumping, you can see the damage it causes to the infrastructure of a city or town.

The Georgetown restaurant Tackle Box finally closed its doors after three years of legal disputes and troubles with its landlord, neighbors, and even their chef. Among the landlord’s other concerns, they accused the restaurant of illegal grease dumping. According to the Washington City Paper:

The D.C. Department of Public Works issued a violation against Tackle Box in June 2012 for illegally dumping cooking oil and grease outside (as well as failing to maintain the alleyway and prevent a rodent problem). The violation came with a $5,000 fine.

Not only can illegal grease dumping hit a restaurant up with a hefty fine, it can destroy your credibility. Not only can this lead to a money-hemorrhaging legal battle, but also eroding your clients and reputation as a restaurant people want to attend.

We hope these articles from around the nation help you understand why you should never dump grease into the sewers. Your dumping will be noticed and there will be stiff fines leveled at you. If you need help properly disposing of grease from your restaurant, contact the Food Grease Trappers. We’ve got a sterling reputation – even when we’re up to our hips in grease.