Emergencies happen in all workplaces, but some of the worst happen in restaurant kitchens. The sheer amount of waste that runs through a kitchen, from raw animal and vegetable discards to food scrapes from dirty dishes, inexperienced staff (especially when it comes to bus and dishwashing positions) and a lack of good measures and practices can lead to several problems in the kitchen of a restaurant.

One of the major disasters is a backup of the wastewater main, usually caused by blockages. One of the main culprits is food waste. When you install a grease trap or grease interceptor, one of its biggest boons (and why it’s required by law) is stopping the grease that can harden within your pipes and restrict or even stop flow. However, both a blessing and a curse is that these systems also stop solids from entering the system. While it’s good that this food waste isn’t entering the water system, it also means it’s filling up your grease trap or interceptor, which means it’s not as effective (or at all effective) once it starts to fill.

For those who don’t follow food grease terminology, FOGS is an acronym for Fat, Oils, Grease, and Solids, the four major things trapped by a grease trap. Sometimes this is referred to simply as FOG, with the S being silent – but silent doesn’t mean absent. Since these solids fill so much room of your grease trap, this means either more regular service (by your own staff or professionals like us) or making sure that it never reaches the trap in the first place. Learn more about food waste solids here. 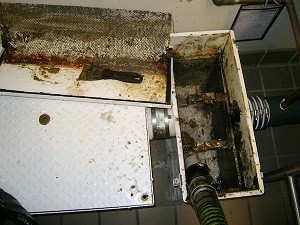 A grease interceptor with a solids interceptor installed BEFORE the trap. These setups are excellent for high volume facilities but DO require consistent maintenance on a daily schedule. The trap itself is not one we recommend and this is photo offered only as a schematic suggestion.

A way of cutting down on service cycles and chances for a real kitchen disaster is the installation of a solids interceptor. These interceptors are designed to halt solids in another chamber before the grease trap, keeping the two separate. This means you have a solid interceptor that can be cleaned out separately (daily, by your staff) of this food waste, which is easier, cleaner, and doesn’t require the specialized equipment for servicing a trap. If you’re restaurant is a high-volume facility in terms of waste water and food waste (prep work, dishes scrapings, etc.) these are a good choice to keep your kitchens clean and help lengthen service cycles for the grease trap or interceptor.

We hope this article has been helpful to learning more about solids interceptors and why they might be a good fit for your kitchen. If you’re looking at getting a solid interceptor installed, or a new system complete with a solids interceptor, contact the Food Grease Trappers. We’re experts in installation, servicing, and VWO transportation for Eastern Massachusetts and New Hampshire.