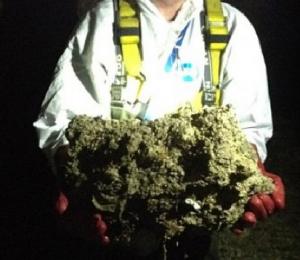 Fatbergs are massive collections of congealed fat, oils, grease, and solids (FOGS) that form in sewers. We’ve written about them before, and if you’d like a complete definition, please check out Fatberg Ahoy! How Could They Happen? for all the details. Two reasons we’re bringing it up again. First, London, England just had another massive fatberg threaten to completely clog up its sewers. Secondly, to shed light on why this is an issue in the UK but not the United States.

This last September, a 133 tonne (metric tons) fatberg was poised to cause sewage backflow up and down London. Just to pause for a moment: 133 tons. That’s 286601 pounds. That’s the weight of 19 African Elephants. It was also spread throughout the pipes, stretching 250 meters (over 820 feet). Again, for a point of reference that’s longer than the iconic Tower Bridge in London. This thing was truly massive, and was described by workers like “trying to break up concrete.” And they are still not done after working 7-day shifts on the thing.

92% of Restaurants Not Using Grease Traps

Thames Water, which manages the sewer and water systems of London, sent out a survey to try and get to the bottom of this massive fatberg. The results, which were self-described as “staggering,” show that 90% of restaurants had not installed grease traps. This, combined with flushed items such as baby wipes and other fabric-based sanitary products down the toilet, has lead to the regular occurrence of fatbergs in London, this most recent one just being the largest since 2013.

The Cost of No Grease Traps

In fact, Thames Water says it spends about one million pounds ($1.3 million in US currency) per month clearing blockages in London and the Thames Valley, with an average of three fat-related blockages per month. The sheer amount of time, energy, and ongoing blockages is tremendous, and all of it means more cost is having to be passed on to the consumer in terms of water and sewage bills and taxes. And since London does have a grease trap policy, it is also going to result in additional fines for many of these restaurants.

Do Your Part to Avoid Fatbergs

The sewage and wastewater pipes might be owned by the city, but it’s important for everyone to do their part. Many restaurants have a “not my problem” system when it comes to FOGS coming out of their pipes until one of the two following occurs. One, the local inspector or treatment plant manager tracks them down and fines them. Two, the FOGS fill the pipes out of the restaurant until they have a sewer backup: the last thing any restaurant wants. Read more about these issues on our blog, Restaurant-City Relations: The Need for the Right Grease Trap.

Do your part to keep fatbergs out of the US by making sure you’ve got the right grease trap or that your current grease trap is working. Food Grease Trappers can help you find the right trap, and keep it clean with regularly scheduled maintenance. Contact us today to get started.