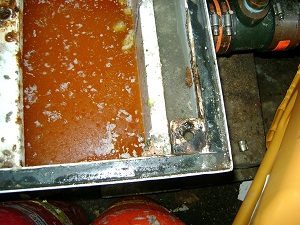 We often get called in during the 11th hour, with a grease trap that has gone critical and severely hampered the functions of a client’s kitchens. Like with many technical problems, while sometimes these crises require complex work and replacement, their issues can often be traced to several simple and common problems that can be solved with some regular planning and a little (pardon the pun) elbow grease. Below we go over the three common grease trap problems at a standard restaurant or food service business.

Out of sight, out of mind holds all too true when it comes to checking grease traps regularly. We’ve encountered grease traps had hadn’t been checked in months, but issues can arise even after just a few days where it hasn’t been checked. If you’re getting water backups from your sinks or drains attached to your trap, the first thing to check is your grease trap. Drain and clean it, and pay special attention to compartment crossovers: if these holes or mesh is clogged, the grease trap can’t do its job. If your trap is in good working order, it might be one of the following problems.

We’ve written a couple blogs (Flow Restrictor Issues and The Grease Trap Flow Restrictor) about this component in the past, mainly because of some poor installations we’ve come across where the part isn’t serviceable. In the span of its use, this component (which restricts the flow of water so the trap isn’t swamped while also allowing air into the trap) will become coated in hardened grease and cause drainage issues. If the trap is clear and you’ve got drainage issues still, this is a likely culprit. This device usually appears as an air intake pipe immediately in front of the grease trap, and if you can’t clear it yourself, it’s time to bring in a specialist.

If water seems to be getting into the trap fine, the issue is probably downstream. If your trap hasn’t been serviced in a while, chances are it’s been completely compromised and FOG has been coating the inside of your pipes, cause flow issues or even complete blockages in your outgoing line. Other issues could include the dishwasher or garbage disposal be used incorrectly and dumping too much waste into the water system, causing similar issues. Depending on where this clog is (your line or the city main), it could be your responsibility to get it cleared.

We hope these tips and tricks allow you to located your issue. If you’re still having issues, or don’t have the time and tools to deal with these issues, we urge you to contact us. We’re experts when it comes to servicing grease traps and interceptors, and can even help you modify or upgrade your system to avoid these headaches in the future. We service much of Massachusetts, New Hampshire, and parts of Maine, and provide free consultations on your grease trap problems.